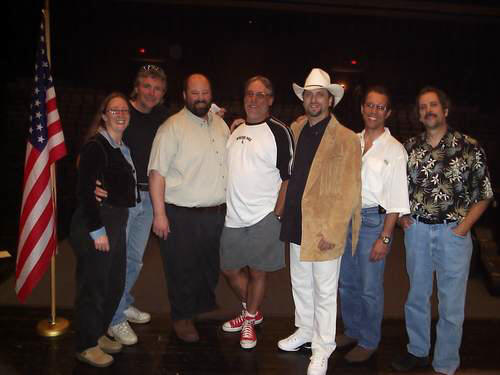 
On July 16th, 2004, I put on what was to be the third benefit concert for my sister Dr. Linda Kinkel.
And oh what a night it was..... The evening started promptly at 8:00 p.m., as my sister Nancy Gamms came out on stage just prior to my opening song and read a brief statement from Linda, as she could not be there. Nancy looked stunning as she read Linda's words, I was so proud of her showing off what  good Kinkel genes can look like...... then she introduced me ha, ha... .

I took the stage in a flurry of long haired, fringe coat manic acoustic rockdom, pumping out my rendition of uncle Ted's... " I just wanna go huntin".
Thought I would start things off by, gettin people wondering what they were in for, only to turn it around and bring the house down with some real guit down, heart string tuggin guit-fiddlin. I introduced  my new band Jim Teolis, Matt Teolis, Angela Licari, Rich Koc and L.J. Slavin. Eric Kinkel & Friends were off and runnin. We mixed it up  with a song set, which included our own renditions of; Dream River,  Demon Lover, I just keep falling in love, Antique Spirits, The Dutchman, How much Tequila did I drink last night, Elvis imitators, Joanne, by Michael Nesmith (remember that one?) and an E.K original instrumental called Jayna's Dance. I am telling you, this new band really kicked some serious string bending butt, I was so proud of them, I either wanted to drop to my knee's, or just out right cry with tears of joy. You really had to be there, and I hope you were. When the band left the stage, I rounded out our set with a solo rendition of Michael Smiths' "We become birds", as a telling tribute to Linda's love of ornithology. This song brings to light the native American belief  that when we die,  our souls become birds. Afterwards, there was a brief 15 minute intermission.

Next up, was my special guest Tom Dundee. Mere words cannot express the heartfelt  songs Tom performed, again you had to be there. Tom shared songs from his two albums,  starting his set with; Would you like to learn to dance, Three legged man, A Delicate Balance, and Jennifer Clandrid, he even graced us with some additional Stevie Goodman tunes. I was quickly reminded that Tom Dundee is a consummate performer doling out quips and witticisms like they were all so natural to him. A humor that is indicative of a long life on the road, a man who understands life in the greater sense. When Tom finished his set, me and my band joined him on stage for a finale rendition of Steve Goodman's "City of New Orleans", with Tom still at the helm, the house demanded a second tune, we all joined in as he lead us through a version of the old time standard, " Walking to Jerusalem". All in all it was quite an evening.

My extended thanks goes out all to all those who helped in other ways too, such as: My nephew Ryan Gamss, for helping me out through out the day, setting up guitars and amps, and hustling around the theatre helping his Uncle Eric stay focused, and generally putting up with your off beat uncle...your the best Ryan !. My sister Nancy Gamss for helping out on stage, and Brad Gamms for his sponsorship, Lou Stavroplous and Allstate, for their sponsorship, John Denbroeder and Gerard Printing for printing the programs and posters, Kevin Donovan and Signal Graphics, for printing the invitations, tickets etc.., Brian Quick, Matt, and Mark for helping out with various sundry of things, Gary Lingner for his enduring and dedicated support with my web site, before during and after the show,  and for taking photos, along with Jim Horst, Chris Hanson, Scot Stadalsky, Keith Dadey (of dadeyvideo production) see banner ad on homepage, Debbie Schaefer, Jackie Hanson and Jennifer Hanson for taking care of tickets at the door. And of course my entire band  for their selfless enthusiasm and dedication.. lets do this again boy's ... and girls. A hardy Thanks from the "Kink" to all of you!!!

Below are some pictures detailing the nights events..
Photo's taken by: Jim Horst, Gary Lingner, Scot Stadalsky, and Chris Hanson